Stroud-based RT Motion Systems (RTM) designs and manufactures some of the world’s leading wireless lens control systems, used to make films and series including Planet Earth 2 and Pirates of the Caribbean.

RTM was founded in 2009 by director of photography Kris Bird, steadicam operator Jamie Mullaney and writer/director Kerry Mullaney, after discovering a lack of innovative and affordable options in the marketplace.

The Vitec Group is an award-winning designer, manufacturer and supplier of equipment and services to the broadcasting, entertainment and photographic industries, with operations in 10 countries and c£400m annual global revenue.

Once a rare sight on set, wireless lens control has rapidly become an indispensable tool for camera departments shooting in fast-paced environments, and RTM’s product range is considered to be at the cutting edge of the industry.

At the time of the transaction, which completed in 2017, RTM Co-founder Kris Bird said: “We have admired Vitec’s vision and breadth of expertise for some time, and are extremely excited to be joining the group alongside industry leaders such as Teradek and SmallHD. This acquisition will give us world-leading support in marketing, reseller channels and strategic management, allowing our technical team to double down on already ambitious R&D plans. We’re all really looking forward to this next chapter.”

Nicol Verheem, Head of Vitec Group’s Creative Solutions Business Unit, said “The filmmaking innovations coming out of the UK are legendary, and RT Motion is another great example of an entrepreneurial company with ground-breaking products. We collaborated with Kris and his team on the launch of their Latitude product, and now that they are part of the Vitec family, we will be able to work more deeply with them on the next generation of solutions for the film and entertainment industry.” 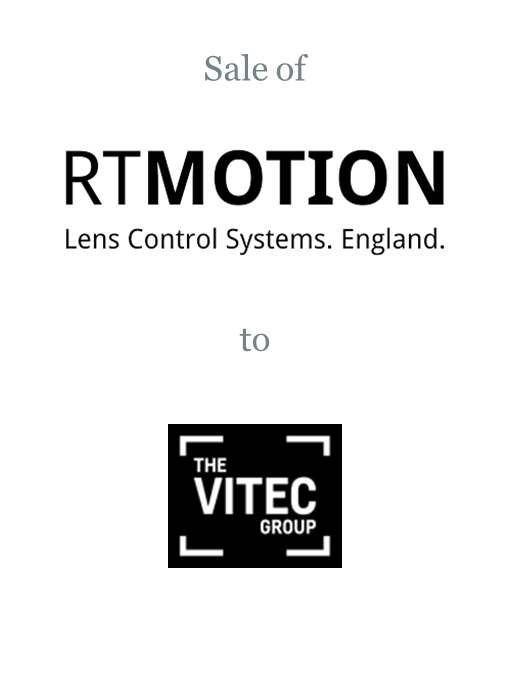