Leading finance magazine Moneyweek has been acquired by Dennis Publishing Ltd, in a deal advised by BCMS.

Under the terms of the transaction, which completed in 2017, the brand joined Dennis’ Current Affairs division, which includes award winning, market-leading titles, The Week and The Week Junior, TheWeek.co.uk  and The WeekDay app.

MoneyWeek is aimed at upmarket, affluent consumers. It is the UK’s best-selling financial magazine, with a well-established print circulation of 46,498 (ABC Jul-Dec 2016) that includes 45,343 active subscribers. The brand has a superb reputation for independence, consumer focus and investment advice.

Founded by The Week creator, Jolyon Connell, and Merryn Somerset Webb, editor-in-chief of MoneyWeek, the magazine was launched in 2000. The title takes a similar editorial approach to The Week. Agora Publishing published the title from 2003 onwards, and grew both its audience and brand extensions, cementing MoneyWeek’s reputation for ‘straight-talking’ advice in the market.

“As a buyer, BCMS helped us streamline our issues and were professional and responsive at all times” – James Tye, CEO of Dennis

James Tye, CEO of Dennis, said: “MoneyWeek is a perfect addition to the growing Dennis Current Affairs portfolio. MoneyWeek already shares some of The Week’s editorial DNA, so it will be a perfect companion to other titles in the portfolio and greatly increase our opportunities in the key financial services market. With such a natural fit between the titles, there will be many ways in which we can cross-promote MoneyWeek to both readers and advertisers.

“Dennis is committed to growing our four areas of excellence through launch, investment and acquisition. We acquire brands with a view to invest and grow their reach, which is exactly what we plan to do with MoneyWeek.”

“The acquisition team at Dennis worked extensively with BCMS, who were instrumental in keeping both sides engaged and talking in this complex transaction. BCMS helped us streamline our issues and were professional and responsive at all times.”

Editor and Co-founder Merryn Somerset Webb, as well as Editor John Stepek, will continue to edit the title under Dennis’ ownership. 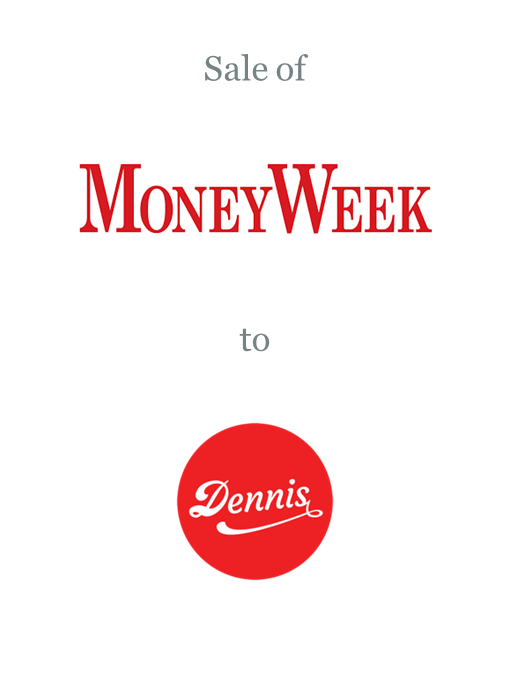 Watch Helen Hunsperger, GC at Agora, discuss what you should look for in an M&A advisor, as part of our BCMS FAQs series